The Japanese mask tattoos are a trendy style of tattoos. These tattoos are famous not only in Japanese culture but also for many art enthusiasts worldwide. The idea of getting a tattoo sounds convincing and exciting. However, before you get it, you need to understand the meaning and reason of why you are getting it done.

The moment you see an Oni tattoo, you will exactly know what it is. These tattoos are unique and intricate, depicting the resemblance of a terrifying, demonic creature. The oni tattoo symbolizes an unworldly dark and powerful force.

Oni mask tattoo is associated with deep traditional and cultural emotions, depicted through a demonic figure. So, if you do choose to get yourself a permanent Japanese mask tattoo, then do it only after getting a thorough knowledge of the symbol.

In Japanese folklore, the oni mask represents the mask of an ogre or troll that possesses supernatural powers. The oni can be seen as having one or two horns and holding an iron club. The central character of the oni is depicted in the form of a villain. But with time, these villain characters also began acting as a symbol of protection from evil.

The Meaning behind the Oni Tattoo

You will see the attraction of oni tattoo if you are someone who loves dark, artistic works. People usually have this tattoo done at the back of their hands or covering their entire side of the legs. The use of these demonic images is for scaring off potential threats, and for keeping oneself protected from the evil energies of other people.

In Japanese culture, the Oni in highly respected, and people perform rituals for it. Oni’s portrayal in skits or plays makes its association with fertility, longevity, and peace. These days, many people get the oni tattoo inked on them without actually understanding the long history and traditions of this symbol.

In Japanese cultural history, oni tattoo was a way of conveying your social status or used as a symbol to signify your devotion to spirituality. But, as time went on, people began considering the tattoos as punishable. The Japanese Emperor himself declared it illegal after World War II as a solution to improve his country’s image.

These days, tattoo lovers from people from all over the world opt for the mask tattoo as they are drawn by its artistic excellence and the deep meaning. The oni mask tattoo is a symbol of protection for people who believe in the spiritual powers of it. Oni tattoo, according to experts, is used as the ability of the devil to punish evil or unfair actions meted towards a person.

The mask tattoo can also be shown in other demonic forms as a representation of evil that fights for the good. Due to the demonic image of the tattoo, many people consider it as a bad sign. It is said that once you decide to get an oni tattoo, then it is a symbol that you are ready to adopt the demon’s characters.

In other representations, the oni tattoo is shown as a sign of growth in strength, which is beyond the human’s strength. Despite oni mask tattoo being generally perceived as evil by some people, they have been good in helping people through hard times.

The masks in oni tattoos are most often associated with that of a Yakuza in the Japanese culture. From a theatrical point of view, the role depicts a woman (Hannaya) who goes on a vengeful rage due to the immense passion and affection she has for her lover.

For some, the symbol is a way of showing the dark sides of a person. It shows the willingness of the person to go to any lengths for the people they love.

Getting an Oni Tattoo

People who choose to get an oni tattoo do so only after they understand the rich culture based on it. You should never get the oni tattoo just because you love the design; otherwise, it can be misinterpreted in many ways. Modern tattoo artists have also begun enhancing the oni images to make them appear darker and more aggressive.

The history behind oni mask tattoo is one of the many things that attracts art lovers to this particular Japanese culture. Getting a permanent tattoo will last forever, so if you are planning to get it done, take the time to understand your tattoo’s core meaning. 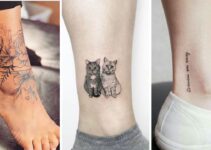